Baghdad (Iraq): shell building started near Baghdad at the start of 2008 on three large tanks, each with a capacity of one million litres of freshly-treated water. These are to supply water to six million people. Value of the contract is more than 200 million US-$ (about 130 m €).

Water tank: starting at the corners, 45 metres of formwork progress at right-angles to create a tank to hold a million litres of fresh water.

The building, 230 metres long, 125 metres wide and 5.7 metres high, will be constructed in reinforced concrete using modern wall formwork. After examining a number of very different products, the contractor decided on the Raster/GE modular universal formwork by PASCHAL (Germany).

The work on the Modules proved to be faster and simpler than that with other products; the results were furthermore substantially more convincing and corresponded better with expectations. Also the Modules can be used as manual portable formwork independent of cranes, another feature welcomed on the site. 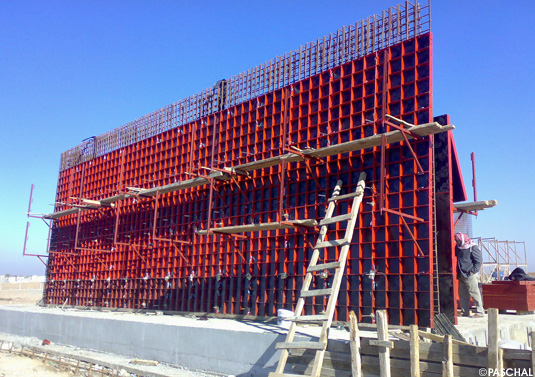 The Modular/GE universal formwork has justifiably earned its name, as it has proved its versatility and flexibility on building sites of every description in over 40 countries, whether in foundation work, on walls, shafts, polygonal structures, piers or beams.
The corners of the tanks were first formed with a set of 27 m x 28 m; these formwork elements were then set and filled the length of a formwork cycle of 45 m by 6.0 m high with 2 concrete pumps within one day.

One (intentional) by-product of this formwork is that it produced a surprisingly good concrete surface. Numerous observers from the Iraqi building sector travelled to the building site to be impressed by and learn from the results.
Inside the tanks there are each 600 concrete pillars 0.5 m in diameter formed by 8 sets of the PASCHAL circular steel column formwork. Each one was topped with a mushroom-head formwork cap to ensure better load distribution at a later date. 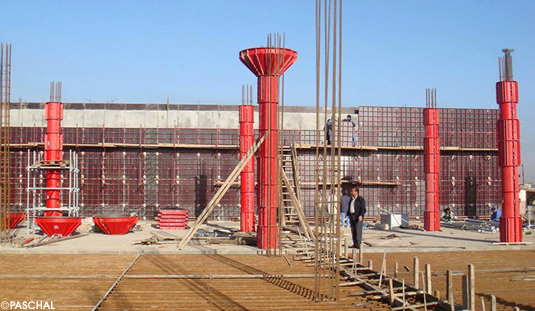 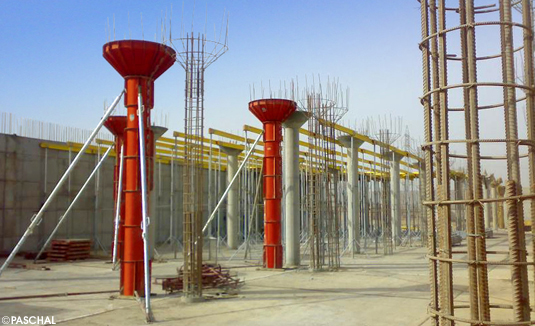 Building work is scheduled for completion in February 2009, after only about a year. According to the local building supervisors, traditional shuttering methods would have taken at least five times as long. A modern supporting formwork would have demanded many more workers to complete the work in a similarly short period.

The project had already been planned as far back as 1979, but it had only now been possible to implement it. The costs for the complete water-treatment and conditioning programme for the millions of inhabitants in the City of Baghdad will amount to over 800 million US$ (about 530 m. €). 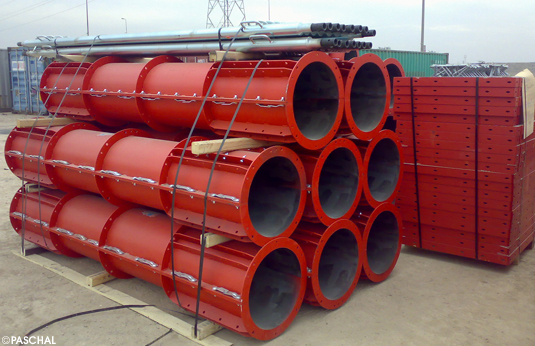 The circular steel column formwork, like the modules, takes up little transport space.