Europe is edging closer together along the major traffic arteries under construction. The expansion of the high-speed rail links, co-financed by the EU with a contribution of about 10%, shows in particular in rural France, what today's state of technology is. The new structures built within the framework of the three-billion-euro "LGV Est-européennes" project for the 300-kilometre (186 miles) high-speed line are laid out for top speeds of the TGV of up to 350 km/h (217 mph). They are connecting Paris with eastern France and cities in Germany, and already TGV and ICE are shuttling for example between Paris and Stuttgart.

Right from the beginning, the environmental implications of the project were taken into consideration. Consequently, the line runs as far away as possible from residential areas, avoids sensitive biotopes, leaves cultural treasures undisturbed and fits in with the landscape in a harmonious manner. 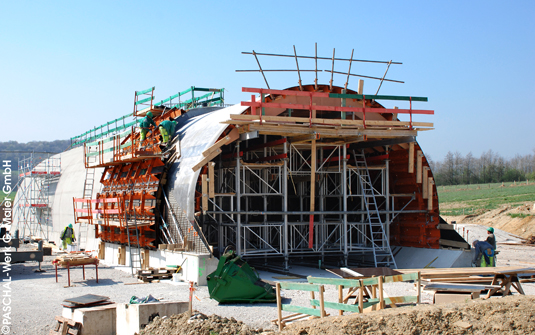 The formwork carriage with the GASS shoring carries the tunnel formwork lying on its side made of several 3.00 m high segments of adjustable-radius trapezoidal girder formwork (TTR). The striations in the concrete just above the inner haunch are from the shaping insert.

The new high-speed line (LGV) from the direction of Dijon crosses the extremely rural Haute Saône (Département No. 70, Franche Comté, to the south of Alsace-Lorraine). The maximum curvature and gradients specified for the high-speed train (TGV), and local geological and geographical characteristics make planning the course of the line and associated earthworks, alternating between cuttings and embankments, into a real work of art. On the 35-km (21 3/4 mile) section between Dijon and Mulhouse there are a number of permanent way structures which are interesting in their complexity.

One of these is the tunnel-shaped passage near Cognières. It really is most peculiar to see this standing on flat ground while under construction in the summer of 2007, with no other building site to be seen for miles around.

The floor of the tunnel lies on exactly the same level as the surface of the surrounding land. The flat excavation, which was let into the jurassic limestone, was first covered with a layer of blanketing, thereafter the foundation slab was put in place. 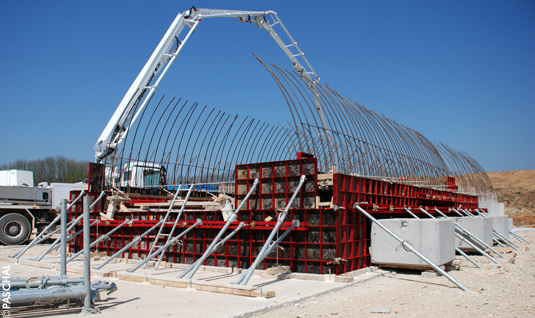 The whole of the base is a complicated formation full of nooks and crannies, which looks a little like the lower part of three successive hexagonal pipes slit open horizontally, on account of the projecting haunches in the tunnel. The exterior walls, shaped like an upright, outward-pointing "L", have in addition screens to protect the concrete towards the front entrance.

The impossible is accomplished

The ideal, in construction and formwork terms, and which on site one always hopes to achieve - provided it is justified by the time taken and costs involved - is to manufacture such shapes monolithically and in one working stage, rather than having to take several steps to achieve it.

For this tunnelling site, the main contractor GTM selected the formwork manufacturer PASCHAL and the formwork system developed by them. For complicated, finely-adjusted formwork, the modular/GE universal formwork is used, which can be installed accurate to the centimetre.

Reinforcements, supports and concrete blocks were used to prevent the single-sided formwork tipping over. A timberwork solution was only used against the concrete forcing its way upwards in the L-walls, with wooden beams. Since each section is designed as a mirror image, the cost-effective variation was chosen and each divided into two concreting cycles. As soon as one cycle was cured, the formwork was quickly transferred to the next in large units with a mobile crane specially brought in for the purpose.
The curved roof was made using the adjustable-radius trapezoidal girder formwork (TTR) which was laid on its side as tunnel formwork. The grades of concrete used were C36/46, XC2-XD3, XF1 S3, and they were filled in using a concrete pump. 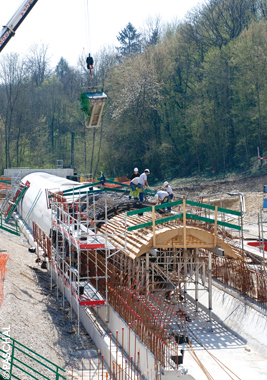 This site appears small compared with those in the neighbourhood:   a 90.0-metre long passage, on a slight slope, for a water-course.  With a base 94.51 m long and 6.60 m wide foundation slab, and a tunnel over that of 2.45 m diameter and having site-cast concrete walls 45 cm (!) thick. At the base, the walls spread inwards by means of a haunch, which lends them additional massiveness.

For previous formwork planning, such architecture would have been an impossibility, because after the concrete had dried out, the formwork would be so firmly wedged in place that it could only have been removed by the use of destructive force.
Here too, the TTR adjustable-radius trapezoidal girder formwork was used. Accurately pre-curved to the centimetre, the formwork was delivered to the building site and only had to be erected. As a product of this stability it is unique in the world, with an 18 mm plywood layer of Finnish birch, and it can be used over and over again without warping or forming ripples, and can be bent right down to a radius of 1.00 metre. It was laid on a framework of GASS bearers (= Great Aluminium Shoring System), which meant full advantage could be taken of its ease of handling for speedy erection and dismantling. Its carrying capacity of up to 140 kN per stanchion was nowhere near approached, as an 11.84 metre-long formwork element weighed "only" about 3 tonnes. 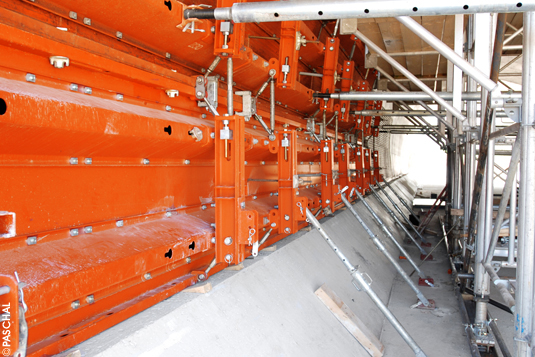 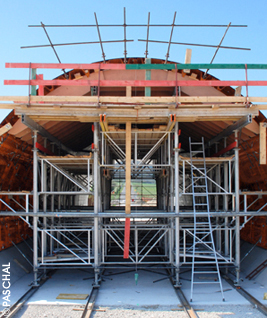 The following tracks were used in the formwork planning: 1. the "sides" of the round formwork, which formed the haunch formwork, could be folded inwards over the full length by means of a hinge. This meant that the complete element could be recovered. - 2. By using spindles integrated into the system, the formwork resting on the GASS framework could be lowered simply, conveniently and accurate to the centimetre. Thus it released itself from the concrete. - 3. Using integrated rollers, guided by tracks, the whole element was moved along into the required position. Lift, fold out the sides, secure, ready! This procedure was followed a total of eight times.

The life of a concrete construction depends very heavily on the quality of its reinforcement. This is even more crucial where curved walls are involved, as here it can very easily happen that inaccurate construction of the concrete covering may lead to it only being a few millimetres thick. Long-term damage extremely expensive to correct may well be the consequence.

In collaboration with the formwork supplier, a concept very similar to the idea above was evolved using a movable special formwork and successfully developed and implemented. The reinforcement was put in place on top of this special formwork and matched to its curvature. As the TRAPEZ now advanced, the special formwork was also moved on and it was possible to concrete rapidly.
This allowed the highest possible quality to be achieved to satisfy the sponsors and the building supervisory authority. 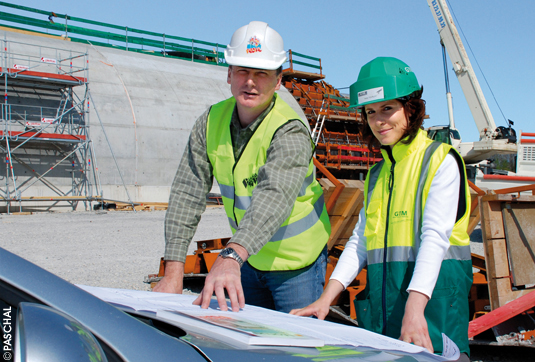 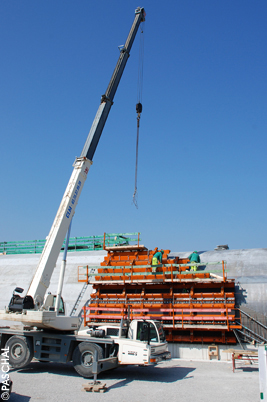 This building site again was of modest proportions compared with the neighbouring one, a road underbridge.
The tunnel of 72.00 m in length has a radius of 4.85 m, 40 cm thick walls and dynamically-tapered portals. It is built on a foundation slab measuring 120 m long and 40 m wide.

Here too the adjustable-radius trapezoid girder formwork was used for the radii and the same procedure followed as described above. The longest element was 12.00 m long and consisted of four sets of 3.00 m high formwork segments, which were fixed, on their sides, to movable GASS towers. Special inserts made for attractive patterns in the perfect concrete finish.

Although after completion, the constructions all looked very attractive, by now they will all have been buried in the formation.
According to the team supervising the construction, the local populace has a positive attitude to this railway routing project.