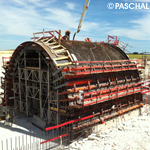 Before the dam comes

France is moving closer together along the main traffic routes, most of which radiate from Paris. A 300 km long high speed railway line from Tours to Bordeaux is now being built for the TGV. 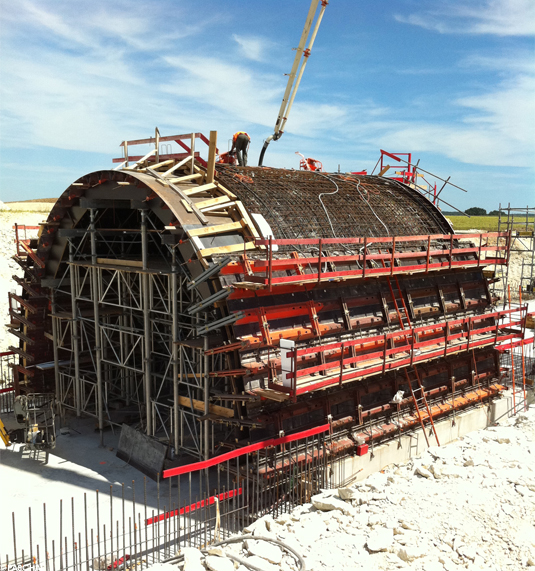 Tunnel formwork : TTS is used as formwork for the tube of the tunnel to be built.

The new railway line for France’s express train TGV between Tours and Bordeaux is one of the largest infrastructure construction sites in France. It will connect the Atlantic metropolis with the capital city in only a 2.5 hours’ drive. To this extent, the construction site is of significance to the nation.

The new route cuts through slopes and crosses numerous areas by means of rail track dams which can reach a height of 10 metres in some cases. The respective height of the route has been selected so that the masses of material to be excavated balances out that to be heaped up as far as possible.
If the railway line crosses existing traffic routes, they are equipped with tunnel tubes before the dam is filled up.
The contracted company is Vinci Construction (Nanterre).

The track has been worked on by Roullet-Saint-Estèphe (near Angoulême) since the middle of 2012. Work is supposed to be completed at the end of 2013. The main focus of it lies on a 36 m long tube which is to be buried by a landscape-changing dam.
The inside of the tunnel tube is to reveal flawless fair-faced concrete, which is the reason why the TTS girder formwork with steel facing was chosen for this work. The exterior will be provided with the compatible but lighter TTR girder formwork with plywood. The inner shoring comprises GASS towers and yokes all of which are made from light aluminium. Yet, one single GASS leg can take up to 140 kN load. 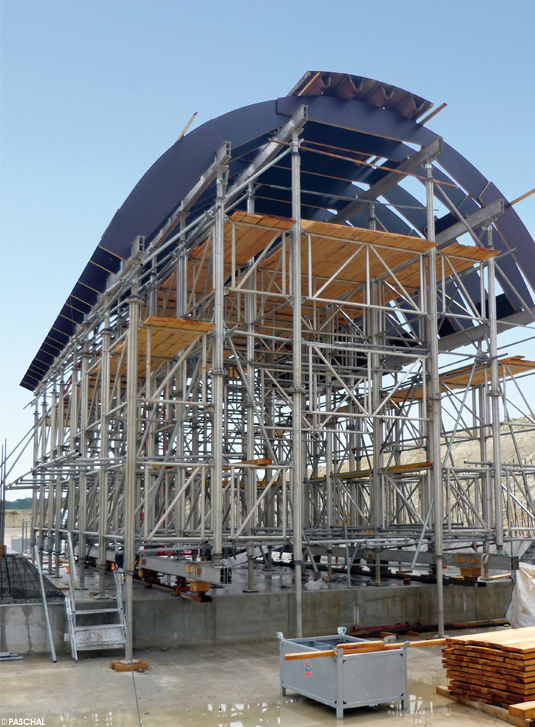 GASS structure : The light weight and easy to assemble GASS shoring system has been designed as 12 metre long mobile carriage. One single GASS leg can take up to 140 kN load. On top of the system there are templates which define the curvature of the radius-adjustable TRAPEZOIDAL GIRDER FORMWORK with steel facing.

The entire formwork is 12 metre long and designed as a mobile formwork carriage which, in this case, is applied in four casting cycles following each other.
PASCHAL has many years of experience in this type of tunnel construction technology so that this construction site could also benefit from that. PASCHAL engineers instructed the teams at the constructions site for two days so that work would advance rapidly and without problems.

The foundation work was carried out with the Modular universal formwork.

In summary, 60 tonnes of formwork material with 430 square metres are at the construction site. 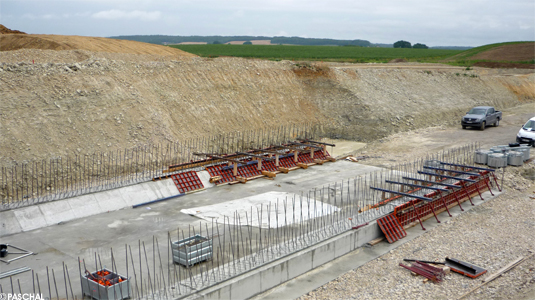 All foundations have been executed with the universal MODULAR formwork. The panels have been retained against the lifting forces of the fresh concrete pressure.

The TTS was mainly developed at the request of numerous West European PASCHAL customers. It is mainly applied in France, yet is also meeting with more and more approval in Germany, above all in the case of architecturally interesting building sites.

The TTS has a stable, flawless steel facing which is free of any indents that wooden or plastic facings must have for mechanical reasons.

The TTS absorbs a fresh concrete load of 80 kN/m² with a very low number of tie points. It can be reduced to an interior radius of only 2.5 metres. With the TTS, ellipsoid or spiral shapes are also achievable; the formwork can be adjusted down to the last millimetre. All of the constructive advantages of the TTR were adopted.