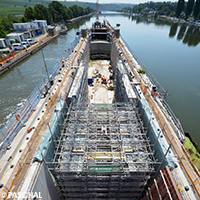 Renovation and expansion of the lock for 110 metre long ships

During the renovation of the lock chamber in Lauffen am Neckar in Germany, PASCHAL demonstrated once again that the motto “Efficiency in combination with formwork, software and services” is implemented in a practical manner.

The awarding authority for the comprehensive renovation project is the Office for Development of the Neckar River in Heidelberg, an Office of the German Federal Waterways and Shipping Administration, that reports to the German Federal Ministry for Transport and Digital Infrastructure.

For approximately 2,500 m² of reinforced concrete lock walls, there are 300 m2 of LOGO.3 wall formwork and 1,700 m3 of GASS combined with parts of the Allround scaffolding in use as rental material.
Another characteristic is the single-sided forming, since there must be no penetration into the new lock chamber wall facings according to the owner's specifications. The modernisation construction work which is being carried out with an estimated cost of around 15 million euros was started in June 2016, and is being carried out jointly by the consortium of Schleith GmbH from Achern, Germany and RSW Roßlauer Schiffswerft GmbH & Co KG from Dessau-Roßlau, Germany.
PASCHAL has been involved since March 2017, and initially supported Schleith GmbH with formwork and scaffolding proposals, in order to implement the technical specifications of the building contractor and develop a cost-effective rental offer for the construction company.

Complete renovation of the second lock chamber, as seen from the riverbank, is required as a result of age-related damage. The work includes renovation of the damaged chamber walls and the movement of the top gate by 3.60 metres in order to optimise the lock chamber for 110 metre long ships. During the renovation of the chamber walls, the Achern branch of the Schleith GmbH Baugesellschaft construction company first milled off 40 cm of the old chamber walls and the niches for fixed ladders and bollard trails.
The removal of the concrete haunches at the base of the lock chamber means that greater depth is available to shipping in the lock chamber, which means that ships may now have a greater draught and can travel into and out of the lock chambers faster.
The lock gates received new standardised mitred gates, the drives for the lock gates were also renovated and a new technical building will house the new electrical, control and messaging technology after the renovation work, so that it will be possible to operate the lock chamber remotely in future. Furthermore, crane pads are being installed for the rapid deployment of mobile cranes.

The four "formwork panels" in the parked position are waiting to be used again. The formwork panels were mounted on site from a combination of LOGO.3 and aluminium walers from the GASS system. The horizontal wooden structures are used as transport protection during movement by crane.

The static repair is required for several reasons. On the one hand, several effects such as ice pressure, cable pull and fissure water pressure were not taken into consideration in the existing static calculation. On the other hand there were massive interventions in the static system due to the removal of the concrete haunches. As a result of the above-mentioned reasons, there are deficits in the overall system in the area of internal and external structural stability while construction was being carried out and in the final state. A total of 300 anchors and piles were inserted to deal with the deficits 132 vertical boreholes for approximately 28 - 35 metre long strand anchors therefore had to be drilled from the top edge of the level plane through the residual chamber walls and vertically into the bedrock. 72 boreholes with lengths of 19 to 25 metres for single-rod anchors and for 72 tension piles with lengths of around 6 metres were also drilled into the bedrock. The bore holes that are above ground are approximately 1.60 metres above the lock chamber base. Sealing work was then carried out in the form of grouting with resin and foam, which was also carried out by Schleith GmbH, in order to reliably prevent inclusions and segregation caused by penetrating water from the Neckar river during concreting.

Preparation for the concreting work

Because of the cramped conditions for the construction site facilities, the lack of space in the lock chamber and the specifications of the building contractor, the Office for Development of the Neckar in Heidelberg, the formwork experts from PASCHAL developed formwork panels from a combination of LOGO.3 and walers from the GASS system.
Four "formwork panels" were mounted with dimensions of 3.40 and 2.70 metres long and 12.90 metres high for each chamber wall. This makes it possible to carry out one concreting section for the total height and in parallel, i.e. at both the right and left side of the chamber.
In order to make this possible in practice on site, the formwork experts, in coordination with Mario Hoffmann, the responsible site manager, developed a horizontally acting spacer from the GASS aluminium shoring system and elements of the Allround scaffolding. For the differentiated formwork planning, they used AutoCAD with PASCHAL-Plan, in addition to RSTAB from Dlubal for the static modelling and calculation of the support. 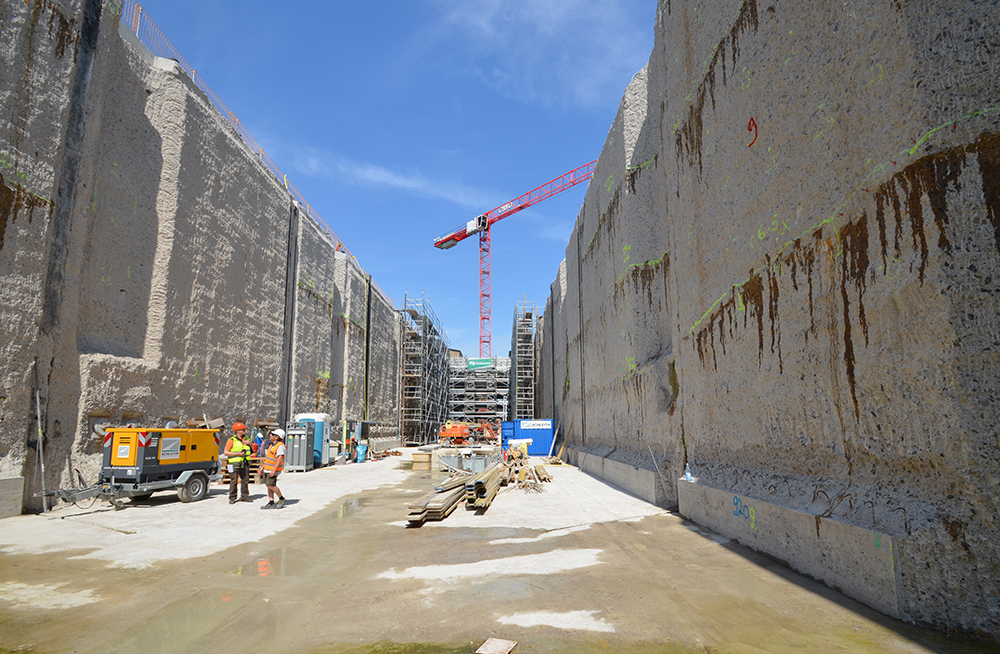 To the left and right are the milled-back lock chamber walls, and in the background is the over-sized "spacer" for the single-side formwork and the concreting to be carried out in parallel.

Millimetre-precise and safe at a distance

The four horizontally acting support units each consist of seven horizontal GASS towers with six legs and spindles on both sides.
The support units are put on heavy-load rollers and were secured against moving away during the concreting process. The heavy-load rollers are guided in U-shaped rails, welded onto double T-beams. In order to move on to the next concreting section, two support units can be moved on the heavy-duty rollers, meaning that the support units are moved in two stages. The four formwork panels per chamber side are positioned by crane. The 11 horizontal concreting sections are between 10.16 metres and 12.20 metres long and must comply with the specified tolerance of 5 mm of clearance between the lock chamber walls. This is checked by an external surveyor's office while construction is ongoing.

Over-sized spacers that can be adjusted to the nearest millimetre

The volume of the over-sized spacer is approximately 12 metres x 12 metres x 12 metres. A sizable working platform is set up on the top level, which acts as the concreting level at the same time. During the concreting work, concreting always takes place on alternate sides, in order to safely comply with the specified fresh concrete pressure of a maximum of 50 kN/m² and to comply with the narrow tolerance range of just 5 mm with regard to the clear end chamber width dimensions specified by the contractor, the Office for Development of the Neckar River in Heidelberg.
50 cm high concrete sections are therefore produced alternately in each section of the lock chamber.
While the other side is being concreted, the fresh concrete on the other side is compacted. Spiral reinforcements are used for precise guidance of the concrete vibrator.
Concreting takes place with a concrete as per ZTV-W 219 C20/25 LP, XC4, XF3, XM1, WF.
In order to reliably prevent segregation at the fall heights, the mouthpiece of the concrete pump was extended by using screw-on plastic tubes.
In order to achieve a resistant surface for the concrete, the Schleith construction company covered the four "formwork panels" with Zemdrain formwork liner on site. 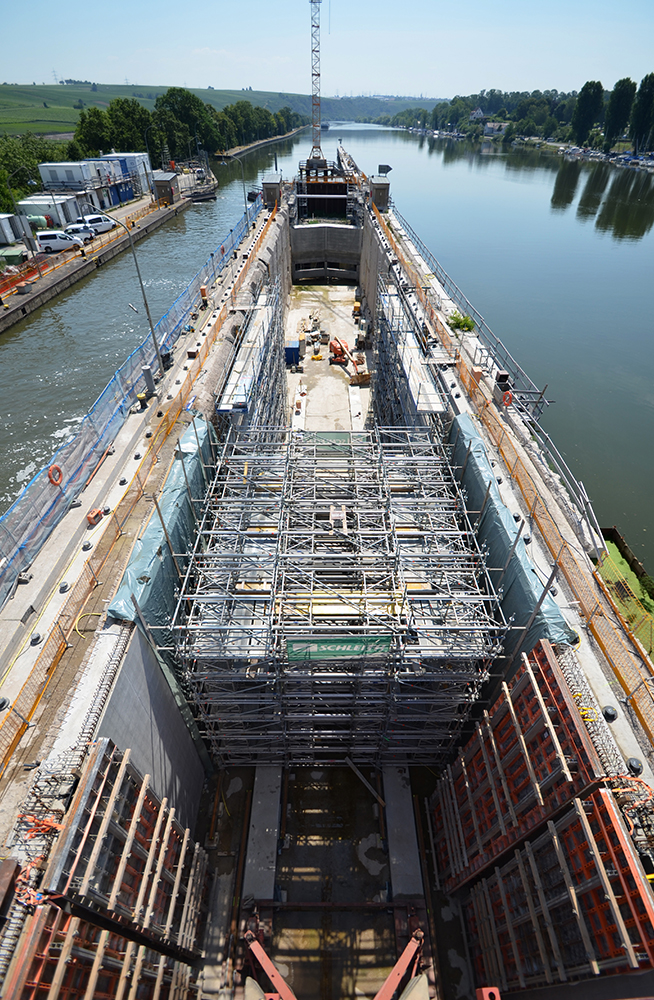 The formwork panels are leaning against the finished lock chamber in the foreground on the left and right. Behind them is the over-sized "spacer", a combination of the GASS aluminium shoring system and the Allround scaffolding. A working platform with an area of approximately 140 m² has been set up at the top level, since concreting and compacting took on alternate sides.