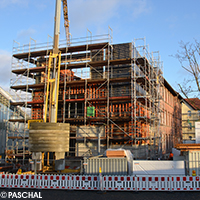 For the extension of an inner-city school, which is structurally and architecturally one of a kind, PASCHAL systems can be used where precast concrete elements reach their limits.
PASCHAL, the formwork and shoring expert, supports the construction company by providing highly complex solutions, such as for the extension of the primary school in Brunswick, and used the Modular universal formwork, the LOGO.3 wall formwork system, hinged corner posts, H20 beams and various shoring and supporting systems to create a successful combination that also incorporated the use of several precast concrete elements.

The pure reinforced concrete structure with a prefixed brick facade is also characterised by the windows over the corner on the ground floor. To support the load, the outer wall to Herzogin-Anna-Amalia-Platz was also designed as bearing beam. Bracing reinforced steel beams run behind the non-transparent filling of the window frames.
Source: springmeier architekten gbr

Extension due to structural fire protection

The extension was necessary as several rooms in the upper floors of the half-timbered annex had to be closed around four years ago due to fire regulations; this included classrooms for crafts and music as well as two pupil care rooms.
In the extension, a second escape route was also built for the main building via an integrated stairwell. The architectural office Springmeier-Architekten designed the extension to allow for another extension to be built at a later date

The extension is estimated to cost around 3.7 million euros and has a built area of approx. 200 m². The gross floor area and the gross room volume are 660 m² and 2,870 m³ respectively, and the extension is expected to be ready by mid-2020 according to the building schedule.

Due to the slight incline of the ground, the semi basement, which is in part due to the groundwater level and existing pipes, the seven difference slab levels ─ classrooms and the sanitary facilities are offset from each other by half a floor ─ in order to create barrier-free transitions to the floors in the existing building, it was not possible to build the entire extension with precast concrete elements or semi-precast concrete elements such as wall panels and slab elements in line with the design created by springmeier architekten gbr. 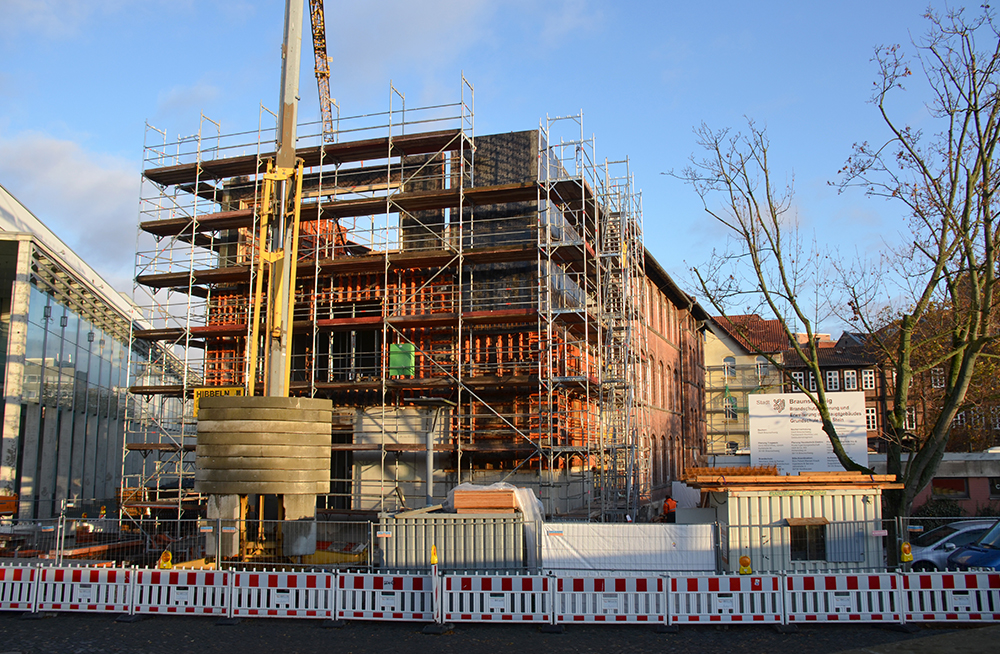 The expansion of an inner-city school is structurally and architecturally in a class of its own. Where the precast concrete elements reach their limits, the concrete constructions are built using PASCHAL systems.

In all places where precast concrete elements could not be used but reinforced concrete structures were desired, the contractor, DEUBAU Bauunternehmung GmbH & Co. KG from Wolfsburg, included PASCHAL in the project.
The responsible foreman, René Grothe, knows that he can always rely on PASCHAL and appreciates the fact that the formwork systems and fastening possibilities are 100% compatible. Even in very special cases, PASCHAL always has a practical solution to safely and smoothly form everything with just one system, either using system complements or a comprehensive range of panels.

The entire wall segment to the existing building had to be built as a single-sided wall and a part of the basement wall to Herzogin-Anna-Amalia-Platz had to be formed using a combination of single-sided and double-sided walls. This special feature was created with the Modular universal formwork, the LOGO.3 formwork system and hinged corner posts, as three corners of the building are not at right angles.
The formwork experts at the PASCHAL branch in Gifhorn were able to solve this formwork problem. Formwork anchoring was also planned here. Anchor bars were incorporated into the base plate so that the single-sided formwork construction can safely support the horizontal and lifting forces. It also had to be taken into account that this part of the building had to be a waterproof concrete structure due to acidic groundwater. In order to comply with the specified limitation of cracking, the base plate and the reinforced concrete wall elements were created using C30/37 concrete with an XA2 exposure class. The slower curing time of the vertical concrete elements was taken into account by the formwork experts, as the strong anchoring points show. The strip foundations for the "semi" ground floor were formed using Modular formwork panels.

Inside of the formwork unit made of LOGO.3 panels secured with adjustable props. On the upper edge of the formwork, platform brackets are mounted onto the LOGO.3 in order to set up the concrete concreting platforms with boards and railings.

From the ground floor up, the vertical reinforced concrete constructions with a higher number of precast wall elements were used. However, many vertical constructions as well as horizontal concrete beams as bracing for in situ concrete had to be realised. PASCHAL provided the formwork planning for this in accordance with the construction company's instructions, while taking into account the transitions from the semi-finished concrete part to the in situ concrete construction. The formwork plan always kept a complete overview of the inventory on the building site in order to ensure that only as much material as needed was stored on the inner-city building site and to simplify the construction process.

The combination also proved effective for the slab surfaces

Some areas were designed with semi-finished partial slab panels. During concreting the thin panels were supported using a combination of H20 beams and PASCHAL slab props.
Owing to the seven different slab levels, the construction company decided to concrete subsequently some of the slabs between the supporting walls. Formwork planning also took this into account in order due to the reinforcement-connections.

PASCHAL supports the construction company by providing highly complex solutions, such as for the expansion of Edith Stein primary school in Brunswick, and used the Modular universal formwork, the LOGO.3 wall formwork system, hinged corner posts, H20 beams, shoring and supporting systems to create a successful combination that also incorporated the use of several precast concrete elements.