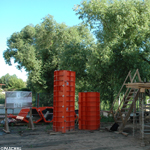 Every day the largest city of the largest country in the world is threatened with gridlock. The infrastructure of the present-day traffic system can no longer cope with the increased number of vehicles. The urban administration of Moscow resolved to upgrade the traffic arteries connecting the inner city to satellite towns. Greater Moscow („Oblast“) has a population of over 7 million.

Up to now the city of Ljuberzy, 2 km south east of the Moscow roundabout traffic, has been reached by means of an urban motorway.  Local and district streets run parallel to this route.  The second largest connecting road, an extension of the Komsomolsky Prospekt is now being expanded.  Traffic will now be routed over a newly constructed bridge, 1,737 km long, where both of the lanes will be structurally separated from each other.  The construction is being carried out by LLC TransKapStroy (Moscow).
A distinctive feature of the architecture is found in additional connections for the stairways:  two for each lane, which reach from the bridge to the ground in three stages.  However, the form of the stairway columns is so sophisticated that standard solutions were out of the questions.

Stairway columns are manufactured locally by filling a prefabricated form with concrete.  However, when these have the form of a symmetrical hexagon (the cross-section is similar to the silhouette of a clam) and all 36 props must have a height of 2.00 to 6.50 meters and everything must proceed correctly and efficiently one certainly needs good advice.
The PASCHAL representative office in Moscow assigned to the main factory in Steinach (Germany) a contract for the construction of a special form designed to be used repeatedly, which can sustain a pressure from fresh concrete of 80 kN/m².  With more than 40 years of experience in metal processing, they created a total of four completely identical sets, each consisting of two extendable, concrete forms, 805 mm wide and 1020 mm deep and with a height of 2.00 and 3.0 m. 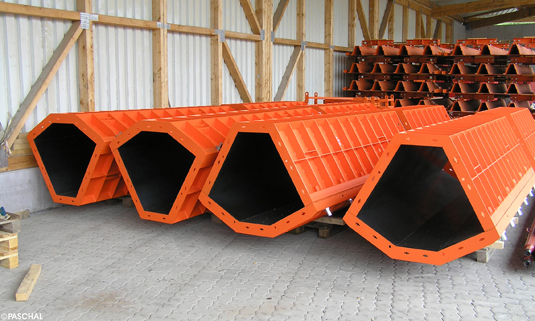 Each form consists of two parts with the required sharp-edged joints which fit together tightly and are secured with locking screws.  A feature of the design is the simplicity and efficiency brought to the construction site: situate the form, pour the concrete and it is done.  Tie openings or involved propping or any other preparation or post-processing were not necessary.  In comparison with carpentry methods this means a large increase in the speed of completion in addition to millimeter precision when working with concrete.

The technical concept developed by PASCHAL convinced the contractor, as did the short production time of four weeks for all units and the constructive quality and reliability ‚made in Germany’.
The scope of delivery also covers props as well as a suitable (specially constructed) working platform which fulfils the most rigorous safety criteria. 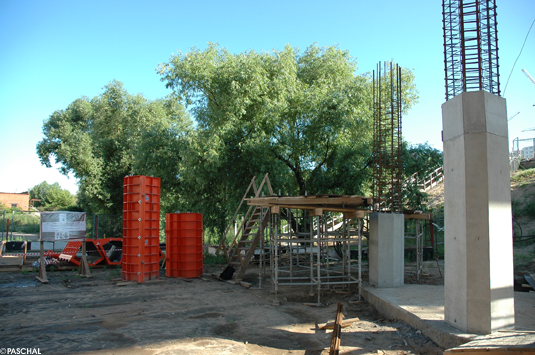 At the construction site the design proved to be successful.  Even the last concrete columns built had profiles with razor-sharp edges and perfect concrete surfaces.

At the end of 2011 the successful construction work is nearly finished.  The bridge will be opened for traffic in the beginning of 2012.